Game of the day

Welcome to BestOldGames.net - the site that offers you the Best Old Games for free download. Our goal is to revive and bring you the retro games you loved the most as a child. Even today, these games have their charm and can bring you a lot of fun for many hours. At this moment more than 600 games are available and waiting to be played again.
Old games are often referred to as abandonware - this is a term for the abandoned software - for example software that is no longer sold and its original creator does not provide any support for it.

In this game, you take on the role of the green hare Jazz, who was sent by the king of the planet Carrotus to search for the disappeared princess Eva Earlong, who was kidnapped by turtle terrorists led by their leader Devan Shell. Jazz Jackrabbit contains a total of four levels of difficulty and is divided into a total of six episodes. Each of the episodes contains 3 planets and each planet has 2 levels that you have to go through. At the end of all episodes, you will still face the final boss. The game also includes bonus 3D levels, for the successful passage of which you will gain extra life.

You can only get to these levels if you find a well-hidden gem on the planet (in one of two levels) or get a perfect score. Another specialty of the whole game are secret levels, which can be accessed in specific areas. You can tell by the fact that the sign is marked with a question mark. Individual levels also have a specified maximum time limit for their fulfillment according to the selected difficulty. If time drops to zero, you will lose one life.

The game had a very solid success, mainly due to the fast tempo, advanced graphics and great soundtrack. Game received two official Christmas additions, Holiday Hare 1994 and Holiday Hare 1995, and in 1998 also the sequel was released - Jazz Jackrabbit 2.

Sir Arthur, a knight without fear and shame, seeks the hand of the beautiful Princess Prin Prin, who reciprocates his feelings. However, the demon king Astaroth has his own unfair plans for the princess, so one day she is kidnapped by his infernals. Bold Arthur embarks on a journey to save her, involving a dark forest, a cemetery full of living dead, a house of flying bulbs, a devil-possessed city and the depths of the underworld itself.

From the beginning, the game was considered one of the hardest in the platformer genre. Arthur has to face not only the moving platforms, the threat of drowning, burning, but above all the relentless time limit in each level and also the fact that a single blow from the enemy means the loss of noble armor. If that happens, the next blow will be fatal, and Arthur must make his way through bats, ogres, and dragons in his underpants unless he finds another one along the way.

There is one clue in the middle of each level. Daggers and bombs are among the typical power-ups for platformers. After the first finish, the player learns that everything was set up by the devil and must go through the whole game once again on a higher difficulty. 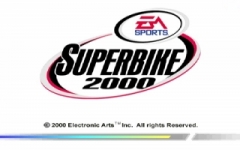 Superbike 2000 is the official game of the Superbike World Championship from Milestone. It contains licenses for all teams, riders and tracks on which the championship is run. The game has traditional race options, such as Quick Race, which is a fast race, the Grand Prix, in which you will find a complete race with training and, last but not least, Championship mode, which is nothing but the season race. During the race itself, you will have the opportunity to set up different views and steering assistants, which will brake you at the right moment when the turn is approaching and help you to place the machine in the ideal incline when cornering. If you are tired of defeating computer-controlled opponents, you will be able to play with live opponents, either in splitscreen mode or over a local network. 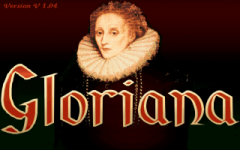 The story begins in 1550, when Queen Elizabeth ascended the English throne. You enter the game as an ordinary salesman, the owner of a small and insignificant business company. As you are ambitious and feel your chance with the arrival of the new queen, you will go up the political and social ladder. You gradually gain influence and wealth as you stand beside the queen's throne, as her counselor.

Gloriana is one of the historical economic simulations and offers many possibilities to achieve the set goal, which are based on historical realities. If you are of a wild nature, you can become a pirate in the game and gain wealth as a pirate. However, you can also choose a calmer way of moving through your business company, with which you will gradually dominate the market. How you influence the political figures of that time in your favor will also remain up to you.

You are 38 years old to build a private political and business empire, the game ends in 1588 when the Spaniards invade English ports. 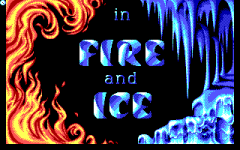 Fire and Ice is a classic hit'n'run platform runner with a coyote in the lead role. The main task in each level is to find the door and unlock it. Pieces of the key can only be found in enemies (eg birds, penguins, etc.), who of course do not just give them to you. It is first necessary to hit the enemy with an ice cube, which will not hurt him, but it will freeze him for a while. Then just touch it. Occasionally, some power-ups could be found in the game, such as a small coyote cub that was invulnerable and fired at enemies. Later in the game, you could also collect snowflakes, and after collecting a certain number, it was possible to freeze more enemies on the screen at once. The game itself is called Fire and Ice, but on the cover of the game is the name Fire & Ice: The Daring Adventures of Cool Coyote and in the main menu Cool Coyote in Fire and Ice ...

A distant future where the player is a contestant in a TV show called MegaRace. MegaRace is a popular show from VWTB (Virtual World Broadcast Television), which broadcasts live broadcasts from races against dangerous gangs. The unique and unforgettable Lance Boyle will accompany you throughout the program. He is a moderator and at the same time your guide to new locations, resp. levels. It will introduce you to new opponents, circuits and, of course, try to intimidate you ... In your own way. The player's task is to eliminate all opponents before he reaches the goal. Nothing more and nothing less. The system is simple and the processing is definitely interesting - for the time being. The player's car is placed on a "projected" pre-programmed track. This allowed the authors to render a really nice and interesting environment. 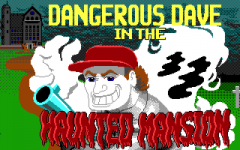 Dangerous Dave in the Haunted Mansion

Dangerous Dave in the Haunted Mansion (aka Dave 2) is a sequel to Dangerous Dave. In this side scrolling action game, you go through a huge mansion with many different levels, fight all kinds of monsters and collect items (mostly bonus points). Here and there you gain another life and here and there at the end of the level you fight with the boss.

A shotgun will be available for defense, but wow, only with 8 rounds at a time, in addition, charging will also take some valuable time. With a bit of exaggeration, it can be said that the game lays the groundwork for later survival horror movies, because the weapon is not used to clear the entire level, but only to the necessary placement to the end. An interesting innovation was also that Dave could shoot obliquely (up / down). There are also gems in the game that increase the final score. The task of "Dave" is to save his brother Delbert by breaking through 8 levels. 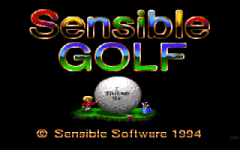 Sensible Golf is a game dedicated to a sport that does not need to be introduced - golf. The game had the same characters - similar to those previously used with great success in Sensible Soccer and Cannon Fodder, although after release it was considered a commercial failure and received rather negative reviews. Part of the problem was that it used the same game engine as Sensible's previous games, so it had to be designed as an arcade game rather than a serious golf simulation, which many critics said led to a reduction in its overall lifespan.

This version of the golf from Sensible Software boasts very simple operation, where almost everything is done for you by a computer. The preset selection can be canceled and adjusted according to your taste, such as picking a stick, the direction of the ball, etc. You focus mainly on hitting the ball. There are a huge number of courses in the game, which you look at from above, so you have a great overview of where there is something. You can choose whether to play training, match, tournament and you can also choose many different ways of scoring and winning.

Pokémon Play It! is a simple game designed to introduce potential players to the Pokémon Trading Card Game.

At the beginning you have to go through several boring learning levels, where both the rules of playing against the PC are explained, as if it were actually played. These rounds are non-random, so it's just a matter of using the predefined cards in the correct order to win. It starts to be more fun only after completing these levels, when the cards are actually randomly generated. You can choose a deck here, or even create your own from all the existing cards. Card game owners can even create a database of cards they actually own here.

The main disadvantage is that there is no difficulty setting here. The artificial intelligence of the opponent is not so good - he does not even think a step forward, so it is not a problem to defeat him and soon you will start to miss a real opponent. 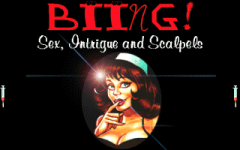 Biing! (the name is derived from "The Machine that makes pink" from the movie The Meaning of Life) is a game about running a hospital. In contrast to the thematically similar Theme Hospital, the humor is rather satirical, you will be in charge of incompetent doctors and nurses whose only qualification is the size of their chest (the authors go so far as to push the message about the dishonesty of the whole project twice before you start to play).

All financial operations take place in a game currency called "dong", for which the player pays not only land and buildings, but also hospital equipment and staff salaries. The money is obtained, among other things, by treating patients, and if the account balance drops to zero, the game ends.

Biing! it is riddled with cartoon images similar in style to the more famous series with Lula. The (allegedly real) nurse will guide you through the tutorial in the video sequence, and if you do not know how to proceed while playing, it is possible to consult the next step with in-game help in the form of an eternally angry boss.