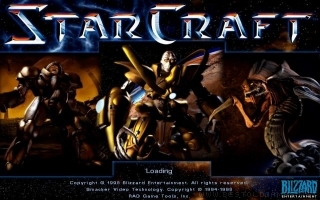 StarCraft puts you in charge of a small group of humans exiled to the edge of the galaxy.
Your mission is to acquire the resources needed to train and expand your military to defend against the Confederate Nations, who are also battling for control of the galaxy's precious resources. This game is designed for multiplayer use. Gameplay in StarCraft has clear similarities to Blizzard's earlier WarCraft II. Building units requires credits and a power source, and once completed you can direct them into combat against foes. You only know the layout of terrain you have visited, and only the exact whereabouts of enemy units which are range for one of your units, due to the Fog of War.

StarCraft: Brood War continues the award-winning saga of galactic warfare as the Zerg, Protoss and Terrans struggle for their continued survival. With the shattered Zerg hive torn apart by fierce in-fighting, the Protoss seek to reunite with their Dark Templar brethren and begin the rebuilding of their homeworld, Aiur. Terran Emperor Mengsk I, having achieved his goal of total power over the human colonies, must now turn his attention to both the rising power of the woman he betrayed -- Kerrigan, the infamous Zerg Queen of Blades -- and a conspiracy deep within his own ranks.