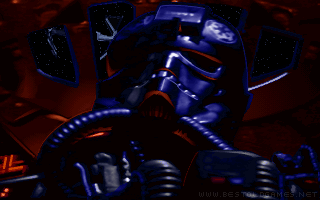 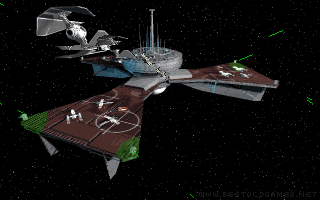 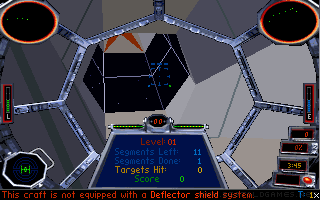 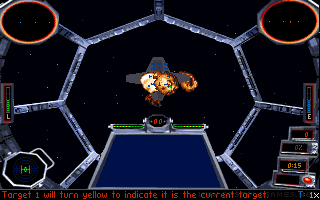 Space fighter simulation named X-Wing from 1993 was so successful that a year later the company LucasArts decided to issue its continuation Star Wars: Tie Fighter. Star Wars fans just by looking at the title already know, which party will you fight this time. In the movies, X-Wing fighters are used primarily by rebel movement (the good ones), while the TIE Fighters are used by the side of the Empire (bad guys). The game is very similar to the first part and it takes all its positives and even make them better. At the beginning you can expect quite long, but very impressive animation that will draw you into the action. you can skip it, but I suggest you to check it at least once, it's really nicely done. Once again, you can choose from several game modes. There is training course, where you learn how to maneuver and shoot with different kinds of space fighters. Then, you can enter "Combat Chamber", which is also some kind of training: you can practice various actions, try to shoot other fighters, but you can not be killed. Finally there is a "Change Battle", where the real fights are. At the start you are offered several conflicts you can participate in. I recommend to start with the first one (Battle 1), which is the easiest one and gradually move to the more difficult conflicts. In the game there are many different types of space fighters (Tie Fighter, Tie Interceptor, Tie Bomber,...) and I will leave it up to you to try them and identify their specific characteristics. Remember that you fight for the Empire and this time,Darth Vader is one of your mates :)

Radix: Beyond the Void