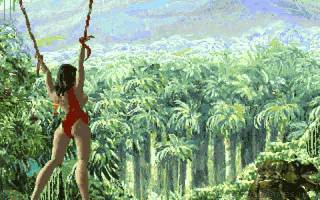 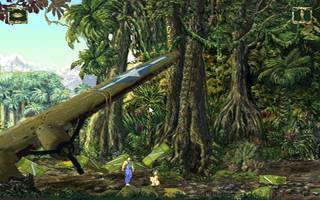 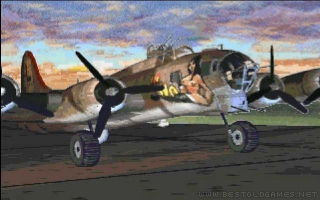 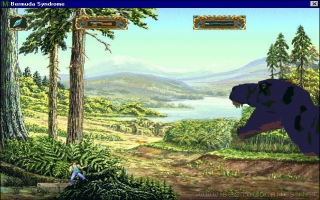 This game takes place during World War II, but it's not warfare game. The main character jumped on the plane to help his country and fought against German fighters. However, his plane has been shot down over the Bermuda Triangle and right before the crash, he flew into mysterious teleportation doors and found himself in the jungle with prehistoric creatures. He rushed the prehistoric world at the moment when the Tyrannosaurus was going to eat an innocent girl and he saved her with the plane. As you can see, you already start the game as a hero. Game explores the phenomenon of the Bermuda triangle, where many aircraft and ships had disappeared, this is why the game name is Bermuda Syndrome. The first thing you notice, that this game is very similar to the legendary game Flashback, it looks rather like a continuation Flashback, but it's not Flashback. Even though the game has all the signs: the movement of the characters is well animated, gorgeous graphics, high quality sound effects and music, and the use of objects is very similar too. The game is very focused on solving logical problems and those are waiting for you on almost every screen where you find yourself (difficulty of the task is diverse, from the simplest ones where you have to shoot down the bird to feed the crocodile to the toughest ones, where you will spend tens of minutes on a single screen). Bermuda Syndrome is mostly a lot of fun and it is a great game if you want to enjoy some action, but you are already tired from all the 3D bloodshed and shooting.