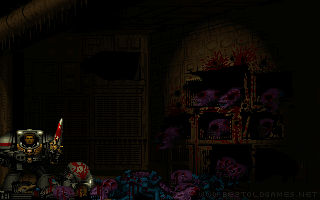 Space Hulk is an adaptation of the board game of the same name, set in the world of Warhammer 40,000 from Games Workshop. In this tactical real-time action game, you control a group of genetically modified Marines, whose task is to fight for the Empire against dangerous Genestealers. Although the Genestealers are equipped only with claws and sharp teeth, fighting them is not easy. Their main advantage is numerical superiority and close combat. To keep the Genestealers away from the body, the Marines are equipped with various destructive weapons such as electric gloves, etc. On the screen you have a view of all five comrades, with the ability to switch between them. Fights take place in real time, but it is also possible to pause the game and move to the map, where you plan the next step and divide the tasks. The missions take place mostly on abandoned spaceships with a dense atmosphere of fear. The game contains 51 missions, including a tutorial and the original Deathwing campaign. The re-release CD-ROM version adds another 9 missions and more digitized speech (in slightly better quality), which can be downloaded here.