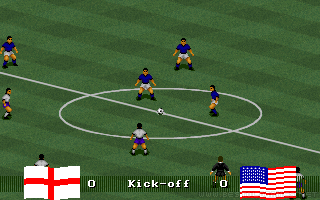 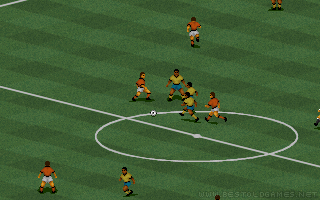 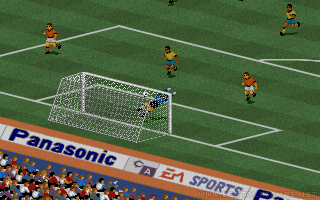 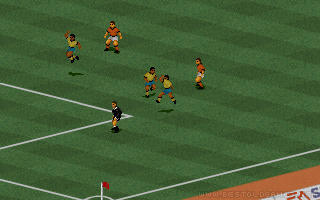 Soccer World Cup 2014 in Brazil is currently underway and so I decided to add another football game. Game, which kicked off a famous football/soccer game series - FIFA International Soccer, or often referred to as FIFA 94. This game itself is associated with the World Cup. In 1994, in fact, there has been a World Cup in the USA and producers of computer games have released a number of games with the football theme, among them this game, which was the most successful. FIFA game lacks nothing of what should every football simulator include: selection of the match (league, exibition, tournament, playoff) team selection (national teams, allstar team), surface, weather, games options (handling of off-sides, fouls), the amount of statistics and other useful settings. All these things were present also in all other football simulators of the time, but FIFA has brought something extra - you can play with a friend against the computer on one computer, excellent game controls with extensive settings and the ability to playback and save individual moments (replays). FIFA has also a great graphics, amazing players animations, who can make a large amount of moves - from basic passes and kicks, to a spectacular heads, chutes, scissors, flips, fouls and celebration of scored goals. Really nice. FIFA 94 is among the best football games from the early 90s and I highly recommend it to any sports fan.